George A. Romero's Diary of the Dead: (The Weinstein Company) 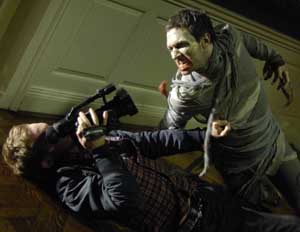 Diary of the Dead is a nightmare, and I don’t mean that in the scary/good way. Writer/director Romero created modern zombie mythology with his eerie and effective Night of the Living Dead (1968).

Since then, there have been four other movies in the Dead series (Dawn of the Dead, Day of the Dead, etc.), and countless imitations. Unfortunately, the imitators are now more imaginative and innovative than the father of zombies himself.

In Diary of the Dead, a small group of student filmmakers capture this particular zombie apocalypse via shaky POV camera. This technique worked brilliantly in the recent Cloverfield, but is forced here.

So is the acting and the writing, for that matter. Every possible cliché is spouted off by pretty actors who look like they just stepped out of an episode of “The O.C.”

Diary is the first independent film in the series since the original, and it’s ironic that the plot involves student filmmakers, because that’s how this movie comes across – amateurish. A lot of fuss was made over Romero’s last effort in the series, Land of the Dead (2005).

That was a good flick. Very scary with a bit of fun, all the while further evolving the zombie mythology.

In Land, Romero hinted that maybe zombies could think a little, work together and perhaps become a somewhat misunderstood (as flesh eating automatons go) segment of society with rights of their own.

I hoped Diary of the Dead would continue to evolve the zombie mythology. Unfortunately, it’s nothing but a cheap imitation of earlier greatness.

George A. Romero’s Diary of the Dead releases in theaters Feb. 15.