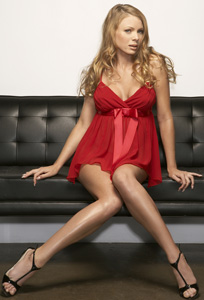 The road from Dallas Cowboys cheerleader to neophyte film producer is paved with challenges. But along with the bumps come opportunities. And Allison McCurdy is all about seizing the moment.

“Everything happens for a reason,” says McCurdy. “I am so far removed from the young girl who started out as a Dallas Cowboys cheerleader; but that experience helped prepare me for today.”

Being one of America’s sweethearts led to parts in Bruce Almighty and the HBO series, “Fatal Kiss.” Up next on her film slate is a role in the upcoming horror movie, Revamped.

“Revamped started out as a short called ‘Fatal Kiss,’” says McCurdy. “HBO picked it up, and now it’s a feature. I play the lead character’s wife.”

Early in her career, McCurdy competed in the local Hawaiian Tropic Pageant and won, becoming “Miss Fort Worth.” This led to her guest appearance on “America’s Next Top Model.”

Standing only five-foot four, there’s a lot more to McCurdy than meets the eye. She’s a gal who remodels her own kitchen cabinets and practices real estate in her spare time.

She also works as a corporate flight attendant for the travel benefits. And although she likes fine wine and diamonds, she’s still practical enough to pull out a 2-for-1 Coffee Bean coupon.

“Pain inspires. Love can empower or devour; it’s all about how you process it. In life, a girl hurts a guy, then he goes on to hurt a girl and on and on – a vicious cycle.”

Modeling may have been McCurdy’s foot in the entertainment industry’s door, but her passion is obviously in writing.

Revamped will be available Feb. 19. For more information, visit www.allisonmccurdy.com.