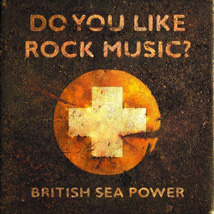 For an album titled Do You Like Rock Music?, there is surprisingly very little rock music. Guitars and drums are often pushed to the sidelines in favor of ethereal sounds. The question that British Sea Power poses in their album title, then, becomes almost a sarcastic one – if you should answer “yes” to it, they slap you in the face with this album.

As a result, British Sea Power has a unique sound, one that may take a little getting used to. After a few listens, their style starts growing on you, but at the same time it would be nice to have fewer ambient noises and more catchy riffs.

Grade: B- Do You Like Rock Music? is currently available.