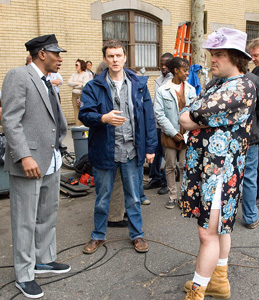 There are very few adjectives fit to describe writer/director Michel Gondry. Instead, it’s best to let the man’s work stand for itself: Eternal Sunshine of the Spotless Mind, Dave Chappelle’s Block Party, The Science of Sleep, Cibo Matto’s “Sugar Water” video, a revolutionary collection of visuals for Icelandic chanteuse, Björk, the White Stripes’ clip for “Fell in Love with a Girl.” Gondry’s archive has not only surpassed the parameters of media like MTV, but has actually gone on to shape a generation in the process.

Now, this virtuoso of modern cinema is back with his latest offering, Be Kind Rewind. The comedy stars funny man Jack Black as Jerry and rapper-turned-actor Mos Def as Mike. These two buddies spend their days “working” in a thrift/video store for an elderly proprietor named Mr. Fletcher (Danny Glover).

After a kooky accident, the store’s entire film library (on the outdated videotape format) is erased. It’s up to Mike and Jerry to come up with a quick and easy way to replace the movies.

That’s when these two hapless fellows discover that it’s easier to remake each film, than to replace the collection altogether. Their technique – called “Sweding” – is even getting a lot of buzz on the Internet.

“It’s in the Wikipedia,” exclaims Gondry.

Although, he’s somewhat disappointed to note that it was New Line Cinema (Be Kind’s distributor), and not some die-hard fan, that put it there. He does concede that the term has no real root in filmmaking: “It’s a word that means nothing. Jack [Black] says it in an improvised scene.”

Regardless of origins, the verb and its ensuing action make for some primo movie reenactments. Hits like Ghostbusters, Lord of the Rings and the ultra-random Driving Miss Daisy get “Sweded” and produce a lot of mirth in the process.

Oddly, for a feature that essentially spoofs Hollywood’s gross national product, Be Kind Rewind was definitively absent any remakes of slasher films. For Gondry, that was a deliberate choice.

“I’m very conservative in my taste, like showing sex and violence,” he admits.

Luckily for the production, however, the director wouldn’t be forced into unsavory subject matter. Many of the studios willingly gave permission for use of their properties. There was, however, one movie that Gondry just couldn’t get his hands on.

“Back to the Future,” he says with a hint of disappointment.

There always seems to be a prevailing thread of humanity in Gondry’s work. The same can be said for Be Kind Rewind.

At its core is a touching commentary on community. Glover was drawn to his role because it was very reflective of his own experience.

“I’ve lived in the same neighborhood since I was 11-years-old,” says the actor. “And the house that I live in now is only six blocks away from where I grew up.”

Other cast members like Mia Farrow and Melonie Diaz also have a strong dedication to those around them. Farrow, who plays the sweet but spacey Mrs. Falewicz, toiled to bring attention to the crisis in Darfur, even during the shoot.

Black, in a moment of seriousness, refers to the veteran actress as “deep.”

Then, there’s Melonie Diaz. The elegant 23-year-old actress has appeared in several projects like Lords of Dogtown and Raising Victor Vargas that champion neighborhood and friendly togetherness.

In Be Kind, she’s Alma, a fun ’round-the-way girl that winds up shooting the recreations with Mike and Jerry. But for Gondry, his initial draw to the subject matter came from another project he was working on. While in the driver’s seat of Dave Chappelle’s Block Party, the auteur was impressed by the feeling of brotherhood that he witnessed among the audience and participating musicians.

“Dave Chappelle got really into my idea about Be Kind Rewind,” he says, “and was going to have a role in the film, but then he backed down.”

Still, the result is in no way lacking. Gondry’s cast seems to really believe in the strength of his creative force.