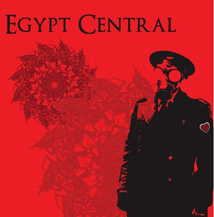 This self-titled debut from Memphis-based Egypt Central was originally released in 2006 on the Lava imprint, but changes within that label and the music industry in general forced the record to get buried. But the music here is way too strong to leave by the wayside, and Fat Lady has thankfully orchestrated a resurrection.

The album has been totally re-mixed and it rocks from head to toe, starting off with a couple of tunes that have alienation as their theme: “Different” and “You Make Me Sick.” The latter song has such an irresistibly hooky chorus burning into the psyche that listeners may find themselves singing the song mindlessly to people who, in fact, don’t make them sick.

“Taking You Down” is another radio-ready smoker that rumbles along on a heavy bottom end, a sturdy base that can’t be toppled by searing guitar accompaniment or screeches from singer John Falls. This album doesn’t break any new ground musically, but the fact is that these guys do heavy modern rock better than most, and they’ll soon have the platinum to prove it.