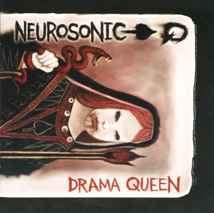 Jason Darr is the singer and guitarist for Neurosonic, and he’s also chief songwriter. So while Neurosonic is a full-fledged band, it’s Darr who pulls Drama Queen’s strings, and at times, it seems like he would need at least two sets of hands to do so.

Rather than stick to one style, the album is full of twists and turns. This works fairly well when it’s confined within a particular song, like on “So Many People.” The song begins with a Nine Inch Nails-like keyboard flourish and chunky guitar rhythms, but then Darr launches into the lyrics, which he delivers in a rapid-fire neo-rap. At first the contrast seems inappropriate, but as the song progresses the riffs not only coalesce – they become downright catchy.

The difference in style from song to song takes a little more getting used to, though – “Are Solar” is a kind of jokey rap-rock, “I Will Always Be Your Fool” is very relaxed and melodic in parts and “Me Myself and I” is Beatles-esque. You’ll hear the potential here upon first listen, but Drama Queen requires repeat spins to fully appreciate.