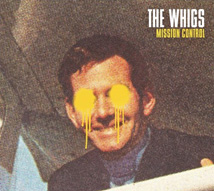 Critics nationwide praised this Athens, Ga. band as they fought their way out of the vast pool of unsigned talent, and they’ve now been rewarded with a newfound position on the roster of ATO Records. It’s only fitting that this big-label debut is called Mission Control because the Whigs are blasting off with precision, and they have a plan.

No, they’re not heading to the moon; they’d much rather touch down in your CD player or iPod. Don’t expect a quiet landing, though – singer Parker Gispert has to hold tight to the wheel as the band heads for a noisy re-entry, shaking and quaking with “Like a Vibration.”

Most of the songs on Mission Control evoke similar thrills – these are short and punchy guitar-driven joy rides designed to leave the listener hungry for more. Gispert may or may not idolize the late Michael Hutchence but much of this album sounds a great deal like INXS, and “Production City” is an out-and-out (and very well done) appropriation of that band’s style.