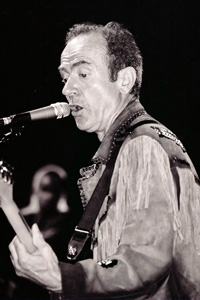 It’s an odd thing, the pairing of two acts, each embracing their former band.

On one hand, Hugh Cornwell filled nearly half of his opening set with Stranglers hits – now routine, though a bit of a shocker considering his years-long lack of contact with his former band mates – particularly prompting the largely middle-aged audience to bounce and sing along with “Always the Sun.” But Cornwell’s solo offerings don’t hold up to the earliest Stranglers material and sounded rather generic (the work of an aging rock star, frankly) between tracks like “Nice ’N Sleazy” and “Peaches.”

Even the latter lacked the sleazy gruffness they once had, as Cornwell’s voice, though as smooth and handsome as he is even at 58, lacks its former bark. A man’s gotta have bite when he says “lap me up,” right?

But he sounded bored. And he couldn’t be heard much over Caroline Campbell, an admittedly talented bass player who could nail the shit out of the “Nice ’N Sleazy” bass line, albeit while looking strangely out of place in girly punk garb.

Meanwhile, From the Jam – those being Bruce Foxton and Rick Buckler – completely rocked it with an expected parade of hits, mod suits and mullets in top shape to boot. They managed to close their encore with “A Town Called Malice,” nary a “Go Billy!” to be heard.

Unlike Cornwell, they really seemed to relish the songs that made them popular as neo-mods, expelling consistent energy at all points. Foxton and new vocalist Russell Hastings (filling in for Paul Weller) made for a tight duet on the group’s cover of the Kinks’ “David Watts” as well.

Now a four-piece, the group’s also got Dave Moore contributing keys and second guitar, and after this, their first trip to the U.S. since 1982, will be releasing new material this year.