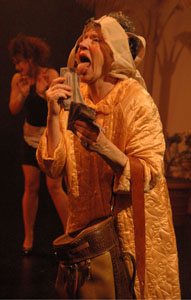 The lust for money is a familiar and popular topic in plays, movies and on TV. It’s difficult to live in this land of mad consumerism without developing some kind of wacky pathology towards the issue of money.

We may criticize others for their greed, yet who among us has not felt in our own heart that old deadly sin? Lust for the greenbacks is always a familiar subject, and the Dell’Arte Company has done well investing in this age-old theme as they bring to the stage a hilarious “remake” of Moliere’s “The Miser.”

Set in a wealthy Malibu-esque hillside community in SoCal, the story revolves around aging heiress Gertrude Hopper, played with relish by the company’s founding artistic director Joan Schirle. Hopper is an arrogant, cruel, gaudily clad, withering old witch of a woman without an ounce of morality. Through her greedy little eyes she sees all things in terms of profit.

The story gets going when she informs her only two children, all grown-up but still living at the estate, of her perverted scheme to sell their reproductive abilities to an old female aristocrat.

The bizarre world portrayed onstage comes complete with two sexy, conniving immigrant housekeepers, a gigolo gardener and flamboyant gay men to boot. If the characters verge on stereotypes, we forgive the production for all the fun we had watching the madness that proceeds.

The Dell’Arte Company is well known for the physicality of its productions, and on this score, it doesn’t disappoint. A decent fight scene involving a whole bag of golf clubs and a few choreographed dance numbers helps to keep the eye moving and action flowing. This is properly obscene and downright vulgar at times, and yet it’s nothing as vulgar as the real world it mirrors.