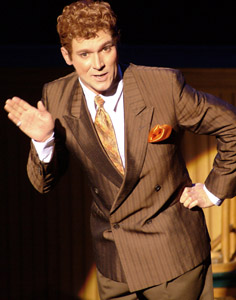 You don’t have to be Jewish to love “The Kid from Brooklyn, the Danny Kaye Story.” Of course, it wouldn’t hurt if you already know and love the great comedic performer Daniel Kaminsky, a.k.a. Danny Kaye, which is redundant ... since to know him is to love him.

The man was a comic genius responsible for the belly aching laughter of millions of people during his fruitful career, which spanned from the late ’30s to the ’80s. In this loving musical biography, we are treated to some of his greatest acts from his prime years.

The “story” part of the play serves as obligatory filler for these really spectacular moments. This is not to say that the show doesn’t offer some interesting insight into Kaye’s life, particularly his relationship with his first wife, Sylvia Fine. She was the writer behind many of his original music acts and functioned as his manager during the early part of his career.

The show, however, takes on a tall order when it tries to represent their troubled marriage. Such an attempt runs the dangerous risk of being just gossip.

Thankfully, the fabulous musical numbers overshadow any minor criticisms. Actor Brian Childers in the part of Danny Kaye is a wonder to behold. He captures the spirit of Kaye so well that at times one gets the eerie feeling that Kaye himself is actually onstage. This feat is accomplished in the smallest and finest gestures for which Kaye was so famous.

Those familiar with Kaye’s repertoire will swoon at the performances of “Deenah,” “Bei Mir Bist Du Schoen” and “Tchaikovsky,” to name a few. Even if the name of Kaye doesn’t ring a bell, it would be hard not to enjoy yourself.