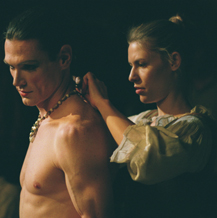 While Richard Eyre’s Stage Beauty definitely has echoes of 17th century play pieces – most notably compared to Shakespeare in Love – this movie is definitely telling a different, eccentric, beautifully distinct tale. Billy Crudup and Claire Danes create sparks, igniting the screen with their rich, yet dysfunctionally complex relationship throughout the film

Kynaston is England’s adored leading lady of the stage, during a time when only men were allowed to act in plays. His grandiose, exaggerated gestures that awkwardly depict a "fragile flower" stereotype of a woman is a huge hit with the crowds. Danes plays Maria, his dresser who secretly yearns for Kynaston’s affections and secretly borrows his Desdemona costume in order to perform in a seedy tavern and follow her dream of being an actress herself.

However, the story takes a turn when the king (played by Rupert Everett) is convinced by his mistress (newcomer Zoe Tapper) to allow women to act, forbidding men from playing women. In one fell swoop, Kynaston’s career is snatched, along with his societal standing. As a result, he goes from exalted to pitied, dumped by the Duke of Buckingham, and Maria is inadvertently thrown into his former role as England’s most celebrated leading lady.

At his lowest of lows, Maria – still harboring her intense feelings for Kynaston – takes it upon herself to turn him into a leading man. And, in return, Kynaston allows Maria to discover the real, fiery woman inside of her as well.

The chemistry between Crudup and Danes is intense, and joined with the breathtaking set and cinematography, Stage Beauty is pure joy to watch. As Edward "Ned" Kynaston, Crudup is phenomenal, balancing the intricate delicacies and intense layers of gender that is required of his character.

Moviegoers will surely be thrown into a ride of passion with Stage Beauty, witnessing the gleeful slashing of gender identity that shapes this raw, unique love story.