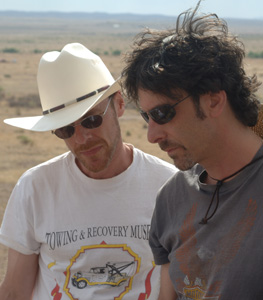 HOW DO YOU CHOOSE?

While you may know that Cate Blanchett and the Coen Brothers are up for multiple Oscars, there’s one guy who is actually competing against himself this year. Roger Deakins is nominated for Best Cinematography for both The Assassination of Jesse James by the Coward Robert Ford and No Country for Old Men. These are his sixth and seventh nominations.

The most prolific Oscar nominee this year is someone you may not have heard of, but his work is definitely something you have heard. Kevin O’Connell just received his 20th Oscar nomination for Sound Mixing for Transformers.

He received his first nomination for Sound for Terms of Endearment in 1984 and has yet to win. An ominous harbinger for Roger Deakins, O’Connell also had to compete against himself twice. In 1996, he was nominated for Twister and The Rock, and in 1998 he was nominated for Armageddon and The Mask of Zorro.

GOOD LUCK WITH THE BETTING POOL ON THIS ONE

While Javier Bardem, Julie Christie and Daniel Day-Lewis have been cleaning up the awards for their respective races, the Best Supporting Actress contest – which is notorious for upsets – will go down to the wire. Tilda Swinton won BAFTA, Ruby Dee won SAG, Cate Blanchett won the Golden Globe and Amy Ryan won more critics awards than anyone.

Though Saoirse Ronan (all of 13-years-old) might seem an afterthought in the race, remember that Tatum O’Neal and Anna Paquin both scored Oscars as underdogs in this category before they had driver’s licenses.

As I mentioned before, the Coen Brothers are up for multiple Oscars – directing, writing, producing and editing for No Country for Old Men. Editing, you ask? Well, you see, Roderick James is their pseudonym. That was their nom de plume when they were nominated in the same category for Fargo, as well.

YOU’RE NEVER TOO OLD Hal Holbrook and Ruby Dee, both 83, each received their first Oscar nomination this year for Into the Wild and American Gangster, respectively. Other nominees that prove you’re never too old include the still-radiant Julie Christie (66, Best Actress nominee) and Albert Wolsky (77, Costume Design).

ON THE OTHER HAND…

You’re never too young, either. I already mentioned 13-year-old Saoirse Ronan. Other young nominees include Sarah Polley (Best Adapted Screenplay nominee for Away From Her) and Diablo Cody (Best Original Screenplay nominee for Juno), who are both 29. Jason Reitman, the 30-year-old director of Juno, is one of the youngest people ever to be nominated for Best Director.