The Used: Liars Get Real 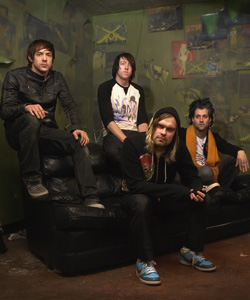 To say the Used’s musical career has been one marked with struggle and hardship from the time of inception would be an understatement. From fighting to break out of their Orem, Utah hometown to dealing with an invasive media and sometimes equally as invasive fans to maintaining creative integrity in the face of fickle audiences, not a great many things have come the easy way for the band.

While lesser bands would have cracked under the pressure long ago, vocalist Bert McCracken, guitarist Quinn Allman, bassist Jeph Howard and new drummer Dan Whitesides continue to take things in stride. Surely, though, the fact that the foursome has amassed one of the biggest and most fiercely dedicated fan bases of any band to break mainstream in recent history helps when dealing with the pressures of their chosen trade.

“You never really expect things like this to happen, especially in Utah,” says Howard on his band’s success. “We always knew this was all we were ever going to do and all we wanted to do. This was our only option and we could either pass or fail, but we never knew what the next step was and it just kind of hit us in the face one day. I think it was once we stopped focusing on just playing shows and started focusing on actually writing and honing the music we were making.”

With three albums under its belt, the band has continued to reinvent its hard rocking sound and has seen both ends of the spectrum with the responses of fans and critics, drawing both praise and criticism, not uncommonly in the same breath. The way Howard sees things, though, the key to continued growth is blocking outside opinions in favor of self-satisfaction above all else.

“You can’t write an album for anyone else or based off what people say,” he says. “What’s one person’s opinion on something that you love? My favorite movies get zero stars. We have to be happy with what we’re doing first and foremost, and if we’re happy with it, hopefully our fans will be, too.”

While not everyone is always appreciative of the directions the band has taken in the past, Howard isn’t going to fight the inevitability of stylistic change for anyone else’s sake.

“You can’t help but change,” he says, adding, “Everybody changes every day. Your surroundings, your friends, your decisions make up who you are and it’s the same with music. Our music is based off moments in life, and it’s always changing. Staying the same and writing the same exact music isn’t progress.”

Luckily, most of the band’s core fans have stuck with them through their growth, and though the band we see today is stylistically a far cry from the one that debuted so unexpectedly in 2002, the foursome has managed to hold onto early fans while adapting to their constantly changing scene. Howard credits this loyalty to the fact that he and his band mates are still the same people at heart who they were when they started playing music together.

“We’re just people, and I think listeners realize that we’ve gone through the same hardships they have while growing up,” says Howard. “They know that we’re equals. We’re not trying to hide anything, and we’re not trying to bullshit anybody.”

At the heart of why their fans care to begin with, however, is that regardless of how the band plays their instruments, their music has always been raw and uninhibited on all levels, making them relatable above all else.

“When Bert writes lyrics, he writes so people get what they want out of a song,” says Howard. “He could write a song that’s about his girlfriend, but the words are so open that they’ll shed light on another relationship you’ve had. To me, that’s really important, that people get what they need out of songs.”

While Howard is modest about himself as always, it’s the similarly shared attitude among all members of the band that provides the instrumental vehicle for McCracken’s words, proving the Used is indeed a prime example of the whole adding up to so much more than the potential of its parts.

Lies for the Liars and the Shallow Believer EP are currently available. The Used will perform Feb. 24 at MUSINK: The Ultimate Tattoo & Music Festival at the OC Fairgrounds in Costa Mesa. For more information, visit www.theused.net.