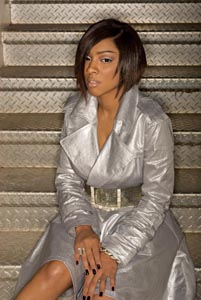 With In and Out of Love, Cheri Dennis’ long-awaited solo debut, Bad Boy’s next female phenom hopes to be a pioneer. Her release, first available this past November on iTunes, marks the first-ever major label R&B album to secure a three-month digital exclusive release via iTunes.

“iTunes doesn’t do exclusive urban releases,” Dennis explains. “If mine is successful, other hip-hop and R&B artists will follow suit.”

Fortunately, her music was well received. The collection instantly reached the Top 10 on iTunes’ Top R&B/Soul Albums sales chart, powered by the Rodney Jerkins-produced “Remind You,” which ranked as the iTunes Store’s Single of the Week, plus the hit single “I Love You” and hot collaboration “Portrait of Love” featuring Yung Joc and Gorilla Zoe.

“It has been a long time coming,” admits Dennis about the two-year recording process of her project.

Dennis’ story is the stuff of music industry legend. Freshly landed in New York for only two weeks in 2001, Dennis met Diddy at a party and wowed the bad boy with an on-the-spot performance. In another two, she was the second female, following Faith Evans, signed to Bad Boy.

Since joining Diddy’s dream team, the 20-something Cleveland native has produced more than a few noteworthy tunes, namely “Ooh La La,” which was featured as the theme song to MTV’s “Making the Band 3,” “So Complete” on Bad Boy’s The Saga Continues and its remix on the label’s We Invented the Remix.

“Performance is the best part of being an artist,” she emphasizes. “I make these records, it’s therapeutic for me and the trickle-down effect is I get to connect with people. That’s the best feeling.”

In and Out of Love will be available Feb. 26. For more information, visit www.cheridennisonline.com.