The Mars Volta: The Bedlam in Goliath
(UMVD) 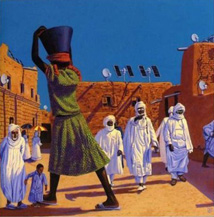 OK, I get it, guys. You’re amazing musicians, and I am thoroughly impressed, but could you tone down the “going crazy” a little?

While the band’s fourth full-length, The Bedlam in Goliath, is like an auditory punch in the face, it thrashes harder, jolts faster and incites frenzies of noise more incoherent than previous albums, leaving its concept (and listeners) distracted by the confusion.

Previous releases have centered around anonymous diaries and tales of men overdosing on morphine, but Bedlam is (according to Rodriguez-Lopez) “sort of … like … Ghostbusters,” where in order to catch the angry spirits accidentally conjured through a Ouija board they bought in Jerusalem, the band laid out “traps,” which happen to be the songs on the album.

By drumming spastically enough to incite seizures and shredding hard enough to make grown men weep, the Mars Volta hope to make up for the tapes that went missing, the studio that got flooded and singer Bixler-Zavala’s physical therapy, all of which they believe were brought on by their use of the creepy game.

Pity parties aside, the band has made an earnest effort to welcome those who were previously fearful of their prowess, but the manageable song times (“Tourniquet Man” clocks in at under three minutes) and melodic verses are all but canceled out by Bixler-Zavala’s shrill vocals and tangential guitar solos, which seep into ears like training whistles for puppies.

With technical abilities unparalleled in today’s music, the Mars Volta should harness their genius instead of drowning it in nine-minute mountains of tribute to their abilities. Until then, I will gladly rake through the muck surrounding minute-long nuggets of mind-blowing, awesome, comprehensible music.

The Bedlam in Goliath is currently available.