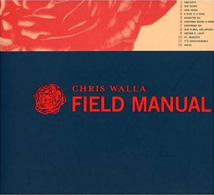 While the music doesn’t stray from expectations, Walla’s lyrics often target intentions and convictions as much as sentiment and emotional response. Throughout, Walla delivers his mostly moody pop with cellophane-wrapped vocals that sometimes glide beneath the seamlessly melodic material.

Walla bumps the pace up with catchy “Geometry &c.” and raucous “The Score,” which combine a national breakdown with a relationship meltdown.