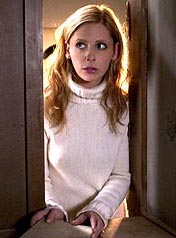 For Sarah Michelle Gellar, the decision to star in the new horror film The Grudge (a remake of the Japanese hit Ju-on: The Grudge) was a no-brainer.

"I have always been fascinated with Asian culture and Asian cinema," Gellar explains as she sits down to discuss her latest project.

"I heard they were going to remake [Ju-on] with the original Japanese director (Takashi Shimizu). I thought it was about time a Japanese filmmaker got to bring what is essentially his vision and his beliefs to America."

Petite, perky and blonde, Gellar made her mark in Hollywood as an unlikely action hero on TV’s "Buffy the Vampire Slayer." She also found success in films such as Cruel Intentions, I Know What You Did Last Summer and the live-action Scooby-Doo and its sequel.

The Grudge is a spooky, inventive ghost story that finds Gellar playing a student abroad in Japan. As she continues to prove she’s more than just a vampire slayer, Gellar admits she’s not really worried about taking on another job in the horror genre.

"This is the field where women can really rule," she declares. "I’m not ‘the girlfriend’ or ‘the wife.’ This is where women take hold of a movie and have a proactive job, and the guy is the boyfriend. People want to see women be triumphant."

While she relished the opportunity to carry her own film, Gellar says one of the most exciting things about making The Grudge was the experience of shooting on location in Japan. "Buffy" has subsequently become a hit in the country but, at the time of filming, the show was just beginning to air. This enabled Gellar to explore Japan without being noticed as a celebrity.

"I stood out a bit being a little blonde American girl abroad, but I had a bit of anonymity which was really nice for me," Gellar says. "I was able to experience something that I had desired for so long on a very real level."

She says, however, that there are still some areas of Japan she hopes to explore in the future. "We were allowed to travel anywhere as long as we took the train. We weren’t allowed to take a plane, so I didn’t get to go to Osaka or down south."

Gellar considers The Grudge to be the beginning of a new phase in her career. While working on "Buffy," her choice of films was limited by the series’ shooting schedule. "It wasn’t always, ‘I’m dying to make this film,’ it was, ‘What fits into my schedule and gives me a chance to do something else creative?’" she explains.

"I couldn’t really do independent films when I was on ‘Buffy’ because if the funding didn’t come in by a certain day, that was it for me. Now I can wait until I feel really good about something."

Next up on Gellar’s slate is Southland Tales, director Richard Kelly’s follow-up to his cult-hit debut Donnie Darko. The independent film is scheduled to begin filming next year and has already attracted the interest of an eclectic ensemble cast including Seann William Scott and Jason Lee.

"I think he’s amazing," Gellar says of Kelly. "He’s so bright and innovative, and after working with Shimizu [on The Grudge], these are the kinds of filmmakers I hope to work with."

And although she is clearly proud of "Buffy," Gellar is moving on and eager to discover what else she can achieve in her career.

"That’s what [this new phase] feels like to me," she concludes. "It’s about things that are both personally and professionally rewarding and that are exciting to me."