Relax to Paris: “Re-launch” and Watch the Crowds Grow 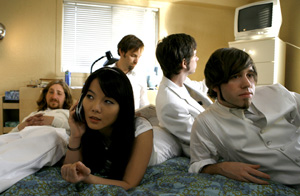 If you’ve had any exposure to the live rock scene in Los Angeles for the last few years, don’t be surprised if the name Relax to Paris rings a bell.

This rock quintet, often referred to as a mix of Jimmy Eat World and the Killers, has been a presence on the scene for over a decade, performing frequently at the Troubador, Roxy and Viper Room.

And so it is that Ryan Gelber, the band’s lead vocalist and guitarist, finds himself at a crossroads. Behind him is a long history of performances and self-published CDs. Now, with their new album, Broken Machines, kicking off the “re-launch” of the band, Relax to Paris finds that a new landscape, filled with larger venues and new media, opens to them.

Relax to Paris started when Gelber, a high school student who had just won the John Lennon Songwriting Contest for his song “Save Me for a Rainy Day,” met up with the energetic and charismatic John Blazey. Together, they formed the first incarnation of the indie-style pop rock band and worked to spread their unique sound.

Their sound was very well received by L.A.’s indie pop rock scene, drawing large crowds over the years to various venues. Relax to Paris has even performed with some big names, most notably piano rock stars Something Corporate and, more recently, ’80s superstars Flock of Seagulls. Their music was also featured in the 2005 film, My Big Fat Independent Movie.

Now, with over a decade of performing with Blazey, Gelber feels that Relax to Paris’ sound is ready to grow. The “re-launch,” as Gelber puts it, is the product of various elements that he feels will culminate in a more mature, polished sound.

The catalyst for this change is the new band line-up, including Gelber’s long-time friend Garrett Marks on bass, keyboards by the indie rock devotee Jenni Cheung and Bart Welt, the left-handed drumming guru. Together, the five members of Relax to Paris have, within the span of a year, released their new album, launched a new Web site and started to move to digital distribution.

“I was quite skeptical about it at first because I love going to record stores and buying CDs,” Gelber admits about the idea of releasing their album on iTunes.

Even though he appreciates the ease of downloading songs and trying new music through iTunes, he still feels a strong loyalty to CDs, especially because of his love of the artwork that was created for Broken Machines. But he does hope that people download their CD from the Web site because the most important thing is that people hear and enjoy their music.

Of course, the recordings are only part of the Relax to Paris experience. As many fans already know, the band puts on an amazing live show. In fact, a chance booking at the Wire in Upland seems to have resulted in a strong new community of fans.

“We got a lot of MySpace messages from people who saw it last time from people who were going to come again,” Gelber says. “Out there, we can actually watch our crowd grow.”

This isn’t to say that the band is backing off from the L.A. scene. On the contrary, the band is preparing for a huge show on March 30 at the Knitting Factory with Moving Picture Show and Run Doris Run.

And so, the band prepares to enter the next phase of their rise, surrounded by fans new and old and offering up touching and catchy songs. Even if you aren’t too familiar with L.A’s live rock scene, don’t be surprised if you hear quite a bit more from and about Relax to Paris in the near future.

Broken Machines is currently available. Relax to Paris will perform March 30 at the Knitting Factory. For more information, visit www.relaxtoparis.com.