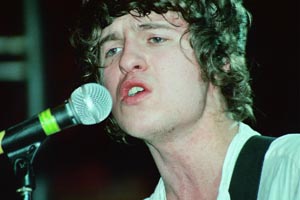 Prior to the Kooks’ sold-out headlining set, for which recently departed bassist Max Rafferty and his stunned face were replaced by a boyish Dan Logan (of fellow Brighton band Cat the Dog), bay area pop group the Morning Benders played to a nearly full house. Their rhythm section was surprisingly bluesy for a band that plays mostly standard indie pop; guitarist Joe Ferrell also managed to stay organized despite having an array of five pedals to choose from, and looked fabulously ghoulish while hunched over his Rhodes.

But oh, those Kooks. They tested out some of the upcoming Konk, including uncharacteristically post-punk track “Do You Wanna (Make Love to Me),” prompting several ladies up front to respond in the affirmative.

Somehow, the Kooks actually managed an energy peak at set’s end, following Luke Pritchard’s solo encore performances of “Seaside” and “Jackie Big Tits” with a full-band, electric version of “Sofa Song.” It wasn’t until this encore, additionally, that whispers started up in the air, and fingers began going up, due to the sudden realization that Courtney Love had been sitting up on the balcony, also watching this band that the rest of us were ... ah ... kooky for.