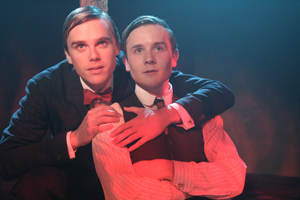 Musical murderers, Dickie and Babe, croon about the “crime of the century” in “Thrill Me.”

The story of 14-year old Bobby Franks and his thrill killers is famous. In 1958, Leopold (Stewart W. Calhoun) is up for parole after a 35 year death sentence.

Loeb (“Dickie,” Alex Schemmer) gets his kicks from petty crime and arson, and Leopold (“Babe”) agrees to be Loeb’s accomplice, with one caveat, Babe wants Dickie. They enter into a bizarre contract.

With the success of Sweeney Todd: The Demon Barber of Fleet Street, a musical about murderers is de rigueur. The play works largely due to playwright and lyricist Stephen Dolginoff’s clever tunes.