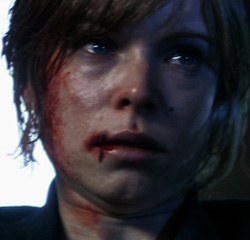 New indie horror film The Signal has a unique blend of horror, gore and slapstick comedy, and though I’ve seen movies that have blended all three (Evil Dead II, Slither), I’ve never seen a movie do it quite like this. Sometimes I didn’t know whether to be scared or laugh hysterically. At times I did both.

Style varies in the film as well. The beginning is reminiscent of the kitschy old school horror films glorified in Grindhouse, while the body of the film is equally stylized between gritty foreign horror and cheeky foreign comedy.

The story is separated into three segments, following three different characters. Each tells their story of how some strange signal coming through the radio, TV or wherever, changes their lives.

Complete with decapitations, chainsaw wielding killers and enough blood to fill the Coliseum (L.A. or Rome), The Signal is a fun ride from beginning to end. But the end is wherein the problem lies.

It’s the same problem as with most horror films. The Signal struggles to deliver a fulfilling explanation or satisfying closing sequence.

After years of being disappointed by horror films’ endings, this one will suffice.