Semi-Pro: Goin’ Wild in the ABA 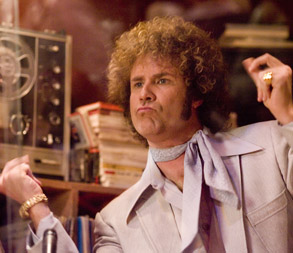 Will Ferrell is using his Sports Information degree from USC in a very unconventional way. Instead of talking about sports, he parodies them.

Not that we’re complaining. From NASCAR to ice skating, Ferrell brings the funny, and this time he’s playing basketball and sporting a ’fro in the new comedy Semi-Pro.

Set in 1976, the film chronicles the funky and flashy ABA, a basketball league better known for its wild spectacles than basketball itself. (It did, however, pioneer the three-point shot and slam dunk contests).

But the ABA’s in trouble. Being absorbed by the NBA, some ABA teams will make it – and some won’t.

As the worst in the league, the Flint Michigan Tropics are determined to achieve their NBA dreams. Tropics owner/player/coach Jackie Moon (Ferrell) is the only one who can turn his team of underdogs into all-stars.

The Tropics players, who include Woody Harrelson and Andre Benjamin of Outkast, trained to get in ’70s basketball shape.

“Jackie Moon is a player from a different era when players were a little more voluptuous, I’d say. Curvy,” says Ferrell.

That said, he didn’t need much help.

“I pretty much have a basketball physique to begin with so it didn’t take that much sculpting.”

Despite Ferrell’s perfect basketball physique, Harrelson was the best player of the cast, in the film and real life. But everyone had their big basketball moment when they got to shoot the ball around.

“[One day] I remember after lunch I was still digesting a bean burrito and we went down, had like 1,800 people there and I actually made a shot. The crowd went crazy. You feel like a real basketball player,” recalls Ferrell.

Besides basketball, Ferrell is pretty familiar with the ’70s era too. Having played Ron Burgundy and now Jackie Moon, many say the decade oddly suits him, and he agrees.

“I felt completely at home,” he says. “I might start wearing neckerchiefs now in my personal life. I think that’s a nice piece of accoutrement, if you have unsightly blemishes or a weird Adams apple.”

While the zany and humorous portrayal of the ’70s era and the ABA may seem like fiction, it’s not far from the truth. The wild stunts and marketing ploys are based on the ABA’s own attempts to lure people to attend their games.

One such stunt had Ferrell wrestling a bear.

“We did something unusual that’s never been done before. We went with what’s called, uh, ‘wild.’ We captured a bear and most of the production was devoted – this is why it was a nine-month shoot – six of those months we had to trap a bear in the Sierra Nevada. The first bear that we got wasn’t big enough. We didn’t like it so we released it in Burbank somewhere.”

With comedic geniuses like Ferrell, Andy Richter and Will Arnett together, the cast had its fair share of on-set shenanigans. One notable prank that had all of them in tears involved Ferrell, Harrelson and Benjamin writing a fake two-page monologue based on Martin Luther King’s “I Have a Dream” speech for a cast mate who initially thought he had no lines. They gave him one day to memorize it.

It’s evident they have difficulty being serious in real life, too. When asked about their romantic Valentine’s Day plans, Ferrell reveals, “I usually dress as cupid and I chase my love around the house with a competition-level bow and arrow. And then I try to shoot her.”

“When is it? My wife might want me to do something,” Harrelson asks innocently.

All kidding aside, comedians Ferrell and Arnett admit there are those days when they just don’t feel like being funny. So how do they get on their A-Game?

“It’s safe to say you show up some days and you don’t feel great, but you’re surrounded by other guys who are having a good time and then you can you can usually feed off them,” Arnett explains.

Ferrell has a different method.

“I usually turn to my acting coach, Jim Beam.”