Shaken, Not Stirred: Approaching Bars After Turning the Big Two-One 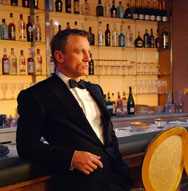 Upon crossing that invisible threshold, one’s driver’s license becomes the key to many new opportunities – most of which involve alcohol.

In addition to gaining access to many clubs and certain venues, turning 21 allows you to venture into that mystical place you’ve always heard about: bars.

Even if you’ve gotten your drink on throughout most of college, bars and pubs are always off limits to those under age. So, you may be able to drink all of your friends under the table, but that doesn’t mean a thing when it comes to the bar.

There are quite a few options for bars within Westwood itself. Brew Co., O’Hara’s, Palomino, Acapulco, Chili’s and various other restaurants all have a full bar and a happy hour. But be sure to know your stuff before going to a bar.

Drinks can be pricey, so don’t expect to down shots like you would in your dorm room. Also, making an ass of yourself will probably get you thrown out, so classy drinking (to a certain extent) is required.

A favorite among many Bruins is the Westwood Brewing Company (also known as Brew Co., 1097 Glendon Ave.).

“I like Brew Co. because it’s very normal without being dirty – it has a very ‘bar’ atmosphere,” says Stephanie Debats, a fourth-year Environmental Science major.

Brew Co. offers karaoke and open mic nights on certain days, giving students another reason to go. Plus, the people who frequent the Westwood bar are mostly UCLA students, giving it a more casual vibe.

However, it’s important to note that not every bar fits a person’s personality. Rohini Acharya, a fourth-year World Arts and Culture major, feels that Brew Co. “is a bit too dark and expected a livelier atmosphere.”

Bars aren’t all about drinking, either. Palomino (10877 Wilshire Blvd.), located by the Hammer Museum, is a popular place for non-alcoholic reasons.

“It’s not the first place I think about when thinking about bars,” says Acharya.

Not that that’s a bad thing. Warmly lit and comfortable, Palomino draws many people with cheap appetizers and pizzas during its daily happy hours (4 p.m.-7 p.m. and after 10 p.m.).

In a huge city like Los Angeles, though, there are many bars outside of Westwood. Cindy Luu, a fourth- year Physiological Sciences major, particularly likes the Backstage Bar (10400 Culver Blvd.), a small dive bar in Culver City.

“It’s a bit older crowd but it’s relatively chill,” says Luu. “The people there are really nice … it’s not a place to go get hit on, but a place to go with your friends.”

With karaoke and cheap drinks, the Backstage Bar is ideal for hanging out since “there are often good singers [who karaoke] and a pool table on the side if you want to shoot a game or two,” informs Luu.

Getting to know what bars are around your area may seem like a daunting task, especially if a bar doesn’t have a Web site. But, review sites will often list smaller bars, so browse around and you’ll eventually come across something that suits you.

“There are a bunch of cool small places around here to check out,” Luu offers. “Each has a different vibe if you’re going to go shoot pool, dance or just lounge, so you’re bound to find something you like.”

Once you find a bar that you feel you could frequent, make sure you remember that alcohol alone doesn’t make the bar a frat party. A certain level of classiness is expected, especially in fancier bars such as Palomino. Just think of James Bond at a bar on his day off.

No matter where you go, though, bars are a great place to unwind and have some fun, especially in a nightlife-rich city like Los Angeles.

Debats adds one last point of advice: “Know what you want to order before you get there.”

Not only does that get you to your drink faster, it also makes you look a little smoother. Like James Bond.