Frogurt Frenzy: Fro-yo fad of the ’80s is back – with a tart vengeance. 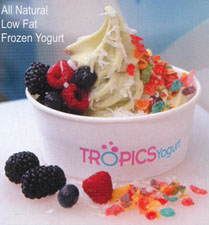 USC students have become completely addicted to frozen yogurt, even though it is February and they should be enjoying warm pie, if not hot chocolate. With another new yogurt shop among the handful of retailers already established in the area, USC is firmly entrenched in the frozen yogurt war.

The University Park area proudly features four frozen yogurt and ice cream stores, less than a five-minute walk from campus. But that didn’t stop Tropics from hopping on the bandwagon last August with its “all natural, nonfat frozen yogurt.”

That’s right. The sweet treat SoCal students are craving nowadays does not in any way resemble ice cream, submit to hot fudge sauce or accept mashed-up candy bars for company.

Instead, it prefers fresh, cubed fruit and berries. It takes pride in its yogurty sourness, low fat content and active cultures – those little microorganisms that somehow survive the freezer and conquer your digestive system with the zeal of a team of scrubbing bubbles.

“Honestly, sometimes I think there is an addictive drug in the yogurt. The first time I tried it, I thought it was strange and had a funny aftertaste,” business student Rachel Geragos says. “But 24 hours later, I was craving more!”

Tropics is one of the many nationwide “knock-offs” that sprang up after the mad success of two trendsetting yogurt chains, Pinkberry and Red Mango. The chain stores’ reputations have prompted customers to give the little guys a fighting chance to satisfy sweet teeth.

“Let’s be honest; Pinkberry really started this yogurt phenomenon,” graduate student Mike McWilliams says. “But whether it’s Pinkberry, Snowberry, Kiwiberry, or anything-else-berry, they all taste the same to me.”

Unwaveringly, the various yogurt joints seem to follow the same weird script. It starts with an atmosphere that looks like it fell out of 2001: A Space Odyssey. Every store seems to have the stark white walls, cute plastic chairs and funky, pastel-colored accessories. Of course, no shop is complete without the essential white lampshades and clear display for the toppings.

Some customers go for a refreshing combination of fresh fruits, while others opt for crunchy granola and nuts. There is also an inexplicable variety of cereals to choose from, including Captain Crunch and Fruity Pebbles for those who want to flash back to childhood.

However, staying true to the fro-yo fad, Tropics offers mochi – sticky rice that is pounded into paste and molded into shape. Yummy?

“[Tropics] toppings are nothing out of the ordinary, except that they did come up with the ingenious idea of having Korean Pepero sticks (chocolate covered cookies) as a topping,” public relations student Katie Warmuth says.

Students either ride along with the tart flavor of cultured milk, or they catch the first USC Tram back to Rocky Road. If your idea of heaven is one of those places where they smoosh Milky Way bars into ice cream on chilled granite, then you will likely hate Tropics’ yogurt.

“We took our first bite and all agreed that it tasted more like cream cheese than the Pinkberry flavor we were familiar with,” communications student Jimmy Atkins says after trying Tropics for the first time.

But don’t worry! USC can accommodate every palate. They certainly don’t want their students to go unsatisfied. That’s why there’s a Cold Stone Creamery, a BerryBest Yogurt, a Columbo and a Baskin-Robbins conveniently located down the street.

“I don’t really care where I get my yogurt,” freshman Scott Landon says. “As long as it’s close, I’ll go wherever.”

Many students agree with Landon that location and convenience determine their yogurt shop of choice. Who knew Trojans were so easy to please?

Price-wise, it’s all about the same anyways. A small yogurt with three toppings at Tropics costs $3.95 compared to a small yogurt at Cold Stone for $4.50.

Regardless of what consistency students opt for, it seems that these yogurt shops are go-to hotspots. Many students meet up for a fro-yo and gossip session. Others walk in armed with their laptops, textbooks, study groups and, of course, punch cards.

One can’t help but wonder: Could yogurt joints be the new Starbucks? As soon as they offer free Wi-Fi, they just might.