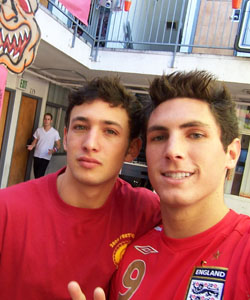 Marshall School’s Lloyd Greif Center for Entrepreneurial Studies at USC was ranked No. 1 among graduate entrepreneurship programs by The Princeton Review and Entrepreneur magazine. But it looks like the latest examples of campus enterprise are emerging from the infamous “Frat Row.”

“We specialize in organizing events at some of Los Angeles’ most acclaimed locations for college students and recent alumni – giving them the opportunity to live the Hollywood experience without the Hollywood crowds or attitudes,” student-owned and operated business, 28 Entertainment, claims.

It is one of the many businesses headed up by 20-somethings armed with contracts and a marketing plan. The company’s history dates back to 1999, when students got together and threw parties for the USC community.

After a successful year, they decided to pick younger classmen to carry on the tradition. The company has remained in the hands of undergraduate students like current senior-partners Ryan Abboushi and Christian Meier.

CW Nightlife is another up ’n’ coming party-planning business founded by two sophomore AEPi brothers, Seth Cohen and Spencer Wampole, who aim to bring the USC community together and give people a chance to get out and have a good time. What differentiates it from competing companies is that their parties are geared toward all college students (18+), not just Trojans.

CW Nightlife has promoters at LMU and other universities to bring in crowds from nearby areas. It threw its first party two weeks ago with over 750 students trying to squeeze their way into Sugar nightclub, but only about 300 were from USC.

Another entrepreneur proudly calls himself a member of the Greek community. Jaspar Weir, a senior in AEPi, founded MW Entertainment LLC in 2005, specializing in nightclub promotions for students.

“I used to organize weekly events for high school age kids,” Weir says. “But I expanded to target USC students. I’ve learned organization, management, how to negotiate and how to deal with people. The hardest part is that no matter how much work you put in, there’s always more to do. You’re on the job at all times.”