Reese Witherspoon: Talks about Producing Penelope and Type A Personalities 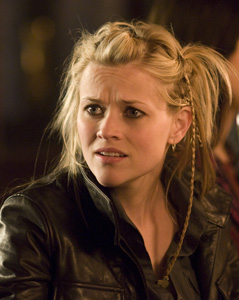 Reese Witherspoon knows what it means to be Type A. As the overachieving Tracy Flick in 1999’s Election and the perfectionist sorority president turned law student Elle Woods in 2001’s Legally Blonde, the Academy Award-wining actress has pretty much come to embody the title. It’s only fitting that Witherspoon’s fledgling co-production company chose to take the same name.

Type A’s first independent film, Penelope, is a charming Beauty and the Beast-meets-Shrek fairytale that makes it impossible to leave the theater feeling unhappy. Christina Ricci stars as Penelope, the cursed daughter of a blueblood family who must live with a pig snout until someone loves her just the way she is.

Witherspoon chose the script, along with co-producer Jennifer Simpson, because of its ability to inspire young women and provide a female character that defies the traditional standard of beauty.

Witherspoon comments, “It was a wonderful, fantastic cinematic movie, but also at the center of it, it had a great female character that was strong and ambitious, but definitely had a journey to get to the place where she would find herself.”

Although Witherspoon contemplated starring in the lead role, she was tied up in other commitments, and the movie had to go forward. This gave Witherspoon a refreshing opportunity – to play a supporting character that is anything but Type A.

The hardest part about playing Annie, a fast-talking, beer-guzzling broad wasn’t that Witherspoon had to channel her tough side, but that she had to figure out how, at 5-feet, 2-inches, to ride a Vespa. Producing also has its difficulties, especially when dealing with an inspirational film that, if edited improperly, could send the audience the wrong message.

“We were very particular with the editing and the script about her not having a miraculous change. [Penelope’s] acceptance comes before her physical change, so really she has to accept herself first as who she is and what’s great about herself before her body physically changes,” she says.

Ricci was always Witherspoon’s first choice to play Penelope, and the actress jumped at the opportunity to play such an original, multifaceted character. Casting James McAvoy as Max, Penelope’s wayward love interest, was a different story. Witherspoon hadn’t heard of McAvoy at the time, but Simpson showed her some of his work, and the duo quickly snatched him up. Now that he has garnered acclaim with his roles in The Last King of Scotland and Atonement, Witherspoon jokes, “I got him when he was cheap.”

Whether starring opposite the not-so-PC Vaughn or producing the tween-friendly Penelope, Witherspoon proves that she can do it all – and well, like only those Type As can.