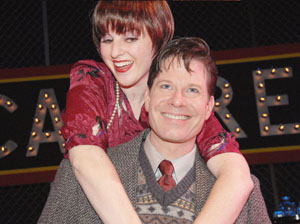 In the early 1930s, according to novelist Christopher Isherwood, Berlin was dotted with swinging pansexual clubs where anything went. The author chronicled his escapades, and his accounts inform the beloved Broadway musical, “Cabaret.”

In a seedy nightclub in Germany, the Kit Kat Club, a struggling American author, Cliff Bradshaw (Christopher Carothers), meets a charming and talented, but not quite proper, young English lady named Sally Bowles (Erin Bennett). The play follows the couple with the lurid supper club, hosted by the nameless Master of Ceremonies (Jason Currie), as the backdrop.

It’s hard not to compare this Sally Bowles to Liza Minelli or the emcee to Alan Cumming’s recent performance on Broadway, but the cast does a fair job. Bennett has a great voice, and Currie’s portrayal of the emcee is light-hearted and enthusiastic. There’s a lot to like about director Jules Aaron’s production of this classic musical.