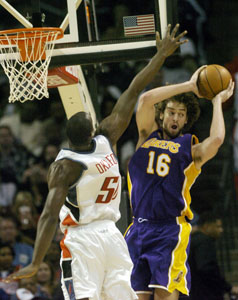 After losing on Feb. 6 to the Atlanta Hawks, the Lakers made sure there was no debate as to who would win the rematch at Staples Center on Feb. 19, which happened to be the home debut for newly-acquired Pau Gasol.

The Lakers easily disposed of the Hawks, 122-93, to even the season series and avenge the loss in Atlanta – one of two losses during the Lakers’ nine-game road trip over 15 days that yielded a 7-2 record (most wins in franchise history on one road trip), a new player and newfound life heading down the final stretch of the regular season.

The Lakers improved to 36-17 with this victory, and it was their fifth consecutive win. Since the Lakers beat the Suns on Feb. 20, the Clippers on Feb. 23 and the SuperSonics on Feb. 24, they are currently No. 1 in the Pacific Division.

Andrew Bynum should return to the Lakers lineup in the next two to three weeks, giving the Lakers a formidable frontcourt with three players measuring 6-feet, 11-inches or taller. With Kobe Bryant and Derek Fisher in the backcourt, and a deep bench that features Trevor Ariza, Luke Walton, Jordan Farmar, Ronny Turiaf and Sasha Vujacic, the Lakers should have enough in them to stage a late season push to not only finish atop the Western Conference in April, but make a deep playoff run for the first time since 2004, when the Lakers lost in the NBA Finals to Detroit.