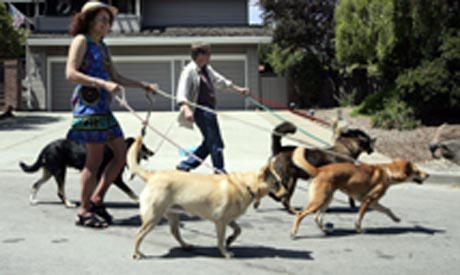 Wendy Peikes was tired of dating guys who’d vanish when they’d met her housemates – three hairy, energetic dogs. So she took to her computer keyboard and found an online dating site where pet aversion is not tolerated.

Now, she’s one of many who’ve found happiness with dating services that won’t tell you if you should expect your prospective mother-in-law for dinner every night but will let you know if a potential mate will cringe at sharing sofa space with a cat, dog, or cockroach.

Datemypet.com, launched in April by a Burlingame, Calif.-based former software developer, was the matchmaker for Peikes and two-dog owner Russ Till. It’s one of a half-dozen dating Web sites already online or under construction that caters to pet lovers.

This new breed of Internet dating is no Chihuahua. "There are 40 million single pet owners,’’ said Dan Cohen, CEO of animalattraction.com. "This is a big business.’’

Just check out the numbers. The $34 billion a year pet industry surpasses the toy industry by $14 billion a year, according to the American Pet Products Manufacturing Association. Sixty percent of American households own a pet – and recent studies by the independent Jupiter Research firm calculates that over $300 million a year is spent for memberships to online dating services.

Cohen also knows that it’s not just pet owners who will sign on. Potential daters could be guys like him. He grew up with family dogs and still loves them but lives in an apartment where pets are not allowed. "But if I were to date a woman with a dog,’’ he said, "that would be perfect.’’

What datemypet.com’s creator, Rob Yau, recognized as this market’s appeal is the strong sense that many people have: People with animals translate to people with heart. "I’ve noticed that when I’m walking my dog, a lot of people come up to me,’’ he said. "And the people that speak to me – it’s not just chitchat. They start talking about their lives.’’

Yahoo.com’s personals service, considered one of the online community’s top three in membership, recently surveyed 5,000 of its users and found that 91 percent of them would use a pet as conversation starter.

Two-thirds of the surveyed users said they’d prefer to see a picture of a potential date with his or her pet than without.

More than three quarters of those surveyed said that a person’s pet gives greater insight into the owner’s personality. "I have just always had this feeling that the man I would end up with would be a huge dog lover,’’ said Elizabeth Perine, a Portland, Ore., mutt owner waiting for a connection through datemypet.com. "There’s just something about a man who has great rapport with dogs that tells me something about who he is – sweet, good-hearted, loving, balanced.’’

Each of these pet-centered sites touts something a bit different. Some, like Animalattraction.com, are free, for now but may charge later. Animalattraction.com also has an educational slant – an affiliation with the National Humane Society, so its users can click on links for information about pet care. The site is also organizing live, paid-to-enter events around the country. The first, held in Washington, D.C., on Valentine’s Day, drew over 300 attendees and 150 dogs.

Datemypet.com’s Yau kept his site relatively simple. "My approach is to make the whole thing fun,’’ he said. ``A lot of dating sites are very serious – you have to answer 100 questions. We never ask people’s salary or what kind of house they live in.’’

His site also encourages users who are not looking for a romantic relationship but companions for a casual let’s-take-our-dogs-for-a-walk friendships.

Till had used general dating sites without much luck. "It was always just kind of a disaster,’’ he said. "The women I met that way were pleasant enough to go out with and have coffee, but it wasn’t really going anywhere.’’

Three months after sending their first e-mails to each other, Peikes and Till are happily developing their relationship. They exchange visits – she lives in Cupertino, he in Carmichael near Sacramento. And when her three dogs and his two, all mixed breed sporting dogs, get together, there are never any fights, Till said. Unless it’s about a Frosty Paws frozen dog treat.