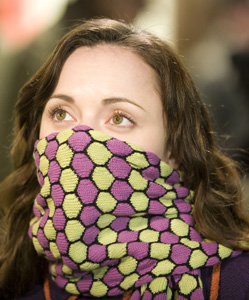 It’s clear to anyone who has followed Christina Ricci’s career that she has chosen some odd film roles. She’s all over the map, and as an actress, it sure makes her intriguing.

Next up is her role in Penelope, a flick about a woman with a pig snout.

“For me, the most important message [of this film] is to not to allow insecurities and criticism that other people put on you to cripple you in your life,” she shares.

Wearing a pig nose during filming might be a hard task for an A-list actress, but not for Ricci. Producer Jennifer Simpson revealed that Ricci never flinched about wearing the pig nose.

And what was it like working with Reese Witherspoon as a producer? Witherspoon was very involved, and it was a lot of fun because she had just won the Oscar for Walk the Line, Ricci says.

Penelope is another unusual film choice for Ricci, but she nails the role brilliantly. It’s just one more example of how she continues to shock us as an actress and keep everyone on edge in anticipation of her next role.