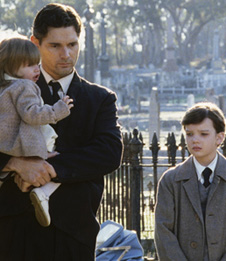 Romulus, My Father is based on the memoir of Raimond Gaita. Romulus, brilliantly portrayed by Eric Bana, is an immigrant who struggles to raise his son, Raimond, alone after both are abandoned by his troubled wife Christina.

Romulus is heartbreakingly loyal and moral, while Christina is hopelessly selfish and unfaithful, lost in depression. Young Raimond forms a strong bond with his father, who stands as a beacon of strength in a sea of disappointments dealt out by his mother.

Together father and son deal with heartbreak, death and economic hardship with each other's support. In the end, Romulus and Raimond emerge not triumphant, but hopeful, their relationship having been enriched by life’s tribulations.

In addition to Bana’s intense performance, Kodi Smit-McPhee proves extraordinary young talent as Raimond, while Franka Potente (The Bourne Supremacy) once again lives up to her stellar reputation. Nick Drake is a perfect pick for writing the screen adaptation of the critically acclaimed memoir, as he stays true to the literary flow of Gaita’s original. In his directorial debut, Richard Roxburgh has already brought forth a new Australian coming of age classic that should play well worldwide.