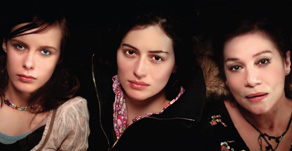 The paths of three women converge on one of the most miserable Christmas Eves that one could imagine in director Angelina Maccarone’s Vivere. It is the tale of Francesca (Esther Zimmering), a young woman who grew up too soon, in pursuit of her runaway teenage sister, Antoinetta (Kim Schnitzer), who, disenchanted with her surroundings in the suburb of Cologne, has gone off to Rotterdam with her rock-star boyfriend.

Along the way, Francesca encounters the scene of a car accident and rescues Gerlinde (Hannelore Elsner) from the wreckage, transporting her to the hospital. Gerlinde, not the type to take particularly good care of herself, checks herself out of the hospital almost immediately to join Francesca on her journey.

Told from each intergenerational woman’s point of view, Vivere offers up an interesting concept of how every person views events differently, and with each re-telling, significant plot gaps are filled in, which keeps the audience guessing ’til the end. Dealing with love, loss, rejection and family dynamics gone awry, the three heroines seek to find solace in each other under highly unlikely circumstances.

Maccarone’s characters are gritty, real and well cast. While the coincidences involved are a little contrived, Vivere is a thoroughly likeable movie with excellent performances all around.