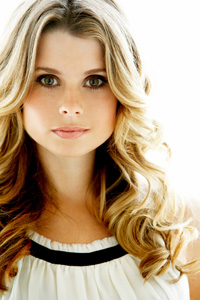 The 28-year-old actress, best known for her six-year role as teenage mom Cheyenne Montgomery on the hit series “Reba,” made her triumphant return to TV on Feb. 4 with “Welcome to the Captain.” Garcia, who is back in her L.A. home after shooting her upcoming film A Very Merry Daughter of the Bride with “90210”’s Luke Perry, doesn’t fear the wrath of critics.

“I was definitely ready for a change,” she says.

She also isn’t afraid of embracing her Hispanic roots.

“Being Latin is part of who I am, and it’s what I am,” she says. “My Cuban culture adds color to my life.”

Garcia, who doesn’t have any formal training in acting, doesn’t forget her comedic background, either.

“When I first moved to this town, I was auditioning for the girl next door or the pretty cheerleader,” she says. “You were expected to not get your hands dirty or have snot coming out of your nose, but ‘Reba’ gave me the space to go wild, be unattractive for a laugh.”

Since her roles in “Freaks and Geeks,” American Pie 2, Not Another Teen Movie and even a guest appearance on “Family Guy,” Garcia remains faithful to comedy as Sweetie Pie opposite Michael Cera in the upcoming Extreme Movie.

On a more serious note, Garcia, who raises awareness about cervical cancer through the organization “Make The Commitment,” hopes to continue inspiring her female fans.