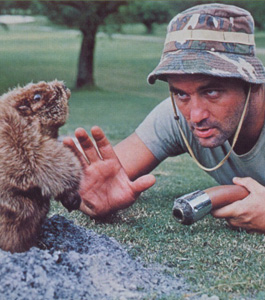 Before Adam Sandler got the crap beat out of him by Bob Barker in Happy Gilmore (and way before Tiger Woods started endorsing Nike), Bill Murray dug trenches and blew apart the fairways of Bushwood Country Club in Caddyshack, the original sport parody. Murray’s attempts to eliminate the pesky gopher with the Flipper vocal track may have failed, but the fiery explosives, plaid pants and Rodney Dangerfield one-liners have lent to its cult following, making Caddyshack a classic.

With three show times over two days, the New Beverly Cinema is giving you a second chance to see this 1980 gem, where fictional Bushwood Country Club is turned upside down by its wealthy patrons’ collision course with eccentric employees and even more eccentric new members.

Caddyshack is all too often accused of being overrated due to its lack of plot and bland anti-hero, but the real masterpiece lies in its quotability. Chevy Chase’s character shoots off hilarious nonchalant comebacks like he’d dreamt about them the night before, and Murray spends the entire film with a speech impediment that lies between Sling Blade and Hunter S. Thompson.

The jokes have gone so far as to spawn a “Saturday Night Live” skit which tried to sell a leather-bound compilation of Caddyshack quotes that would make men more able to communicate in their day-to-day “manly” conversations. Masculine conversation abilities aside, there’s truly nothing finer in early ’80s American cinema than the inherent boredom of golf enjoying a spin through the comedic talents of Murray, Dangerfield and Chase.

If you’ve seen Caddyshack enough to start writing the stage version, spice up one of this weekend’s afternoon runs by coming dressed up as your favorite golfer and imagining the movie as director Harold Ramis originally would have liked – scored entirely to Pink Floyd music.