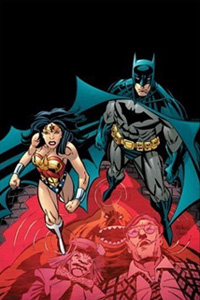 Brian K. Vaughan is certainly on a roll. After the success of Y: The Last Man, Ex Machina and Pride of Baghdad, DC is releasing a kind of Early Works compilation, featuring Vaughan’s work on Batman and Wonder Woman.

Included in the collection are loosely-related stories concerning identity and how we define ourselves. The centerpiece, a three-parter featuring Bruce Wayne’s other alter ego, Matches Malone, and villain the Ventriloquist, is fantastic. Also included is a solid stand-alone with villains Man-bat and Mad Hatter.

The book falters, however, with the final arc, Wonder Woman’s run-in with Clayface – an intriguing concept that, by Vaughan’s own admission in the introduction, never really takes off. Also included is a mini-story introducing a new Batman villain, The Skeleton, who never caught on.

All in all, worth a read for Batman and Vaughan fans alike. Just keep in mind that at that time the comics’ golden boy was still developing his own identity.