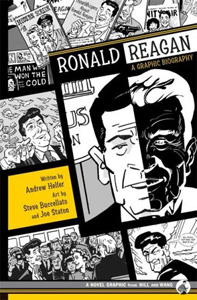 How did the son of a Depression-era Midwest farmer manage to become President of the United States, only to go on to enlarge the gap between rich and poor like never before while overseeing an unprecedented peacetime military buildup? Andrew Helfer, along with artists Steve Buccellato and Joe Staton, trace Reagan’s rise from small-time sports announcer to rising movie star to head of the Screen Actor’s Guild and staunch anti-communist, to governor and ultimately, to president in a fascinating graphic novel.

Revered and reviled, Reagan lived quite a life. Helfer tells it in impartial text, giving Reagan a fair shake, while the stylized exaggeration of the artwork provides an appropriate amount of irreverence for such an unlikely President. It’s a completely engaging work, breathing fresh life into the often staid and lifeless political biography.