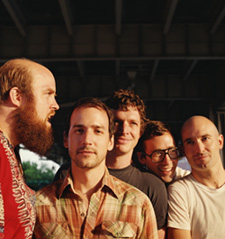 I’m set to interview the three lesser-known members of Les Savy Fav, and I’m terrified – partly because I’m a fan and don’t want to sound too researched or too unsure, and partly because I tend to make sarcastic jokes out of poor judgment. In 40 minutes I will be intimidated by guitarist Seth Jabour, who’s sharp and quick, allowing no room for ambiguous wording. I’ll reassure second guitarist Andrew Reuland that his shiny dome contrasts nicely with that of the group’s frontman, Tim Harrington, causing all present members to collectively defend Harrington’s hairline. And I will struggle to bottle up my brand new fixation with drummer Harrison Haynes, who’s got the sex appeal of Alec Baldwin circa Beetlejuice and a manner simultaneously timid and bursting with enthusiasm.

Reuland is a longtime friend and former Rhode Island School of Design classmate of the group’s members, and as of September’s long-awaited Let’s Stay Friends, is now the band’s second guitarist, a delayed replacement for departed founder Gibb Slife.

Jabour: “I was watching Sean Na Na play one night at the Irving Plaza, Sean Na Na usually being a four-piece band. On this particular night, they had Justin Chearno on guitar, and it sounded a lot bigger. Playing songs as a four-piece gave us the signature sound that people came to expect from us – angular, this and that – one of the great things was that the rhythm section really got to dominate. [But] I thought the important thing [with Let’s Stay Friends] was, let’s not repeat Go Forth, let’s not repeat the front end of Inches. Whether you know it or not, [Andrew’s] contributions on the album are profound in ways that a casual listen wouldn’t give you.”

Assuming that Les Savy Fav was tired of being further questioned on the topic of that new sound they’d adopted, the one less angular and a touch less punk than previous efforts, I refrained from prodding about the musical evolution I’d read so much about. What the addition of a second guitarist has meant for this group, though, is that they’re once again capable of letting intricate riffs and powerful chords layer up to balance out the energy of Harrington, who often steals the spotlight, particularly in the press and on the topic of the band’s infamous live shows.

In fact, it is Jabour who somewhat takes the reigns and acts as assertive spokesman for the band, addressing what some might consider Les Savy Fav’s elephant – its musicians are usually overshadowed by the daring antics of its vocalist.

Jabour notes, “I don’t like when the band gets posted down to the backing band – we’re a collective. It belittles the effort that everybody else puts into it.”

He, if anyone, is entitled to this right – though Les Savy Fav’s reviews often cite a tight musicianship, it is particularly his incredible ability on lead guitar that goes uncredited more often than not, and which even on its own holds up to the strength of the rhythm section that essentially dominated, as he’d previously noted, albums like 2001’s Go Forth. Most remarkable about Les Savy Fav is how necessary each member is to the collaborative effort; Les Savy Fav is a group whose each and every member can be singled out as a driving force.

Not only is this group very much a collective of equal contributions, they are fiercely loyal to one another and the roles they offer. These men are just as quick to look out for one another in conversation, where they will defend the fact that Reuland is an innovative guitarist, that bassist Syd Butler not only makes equal time for Les Savy Fav and Frenchkiss Records (which he owns and which began with Les Savy Fav) but is generous with his time management, and that Harrington’s not only handsome but has a perfectly decent head of hair.

They are allegiant with family and fans as much as with one another, and outside of the band are prone to sharing their workdays with their significant others. Haynes, an artist, runs the Branch Gallery with wife Chloe Seymore, while new parents Harrington and his wife Anna design apparel for their business, Deadly Squire.

Happy on the home front, with sales of Let's Stay Friends at a personal high, despite a well-publicized leak last year. What's left to satisfy? For one, solving the identity of "Patty Lee"'s video subject, their English "dancer in the dark."