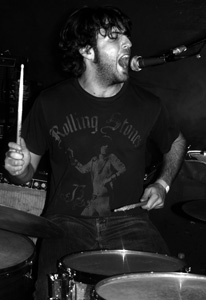 On the final day, we visited Mr. T’s Bowl and caught up with Jorge, one of the creators of REAL BOSS HOSS, to uncover a bit of the history behind the music.

How long have you been running REAL BOSS HOSS?

Since 1999. it actually started out as a fanzine – we put out two issues and tried a third, but ran out of money and steam. In 2003, we decided to start doing shows.

We then moved to L.A. and did one show at the Ramada Inn in Hollywood. It was a disaster.

We then moved to the Stagger Inn in Bellflower, and that’s where we really started getting noticed by people. We have been at Mr. T’s since 2007, and it’s been great. What motivated you to get it together?

The lack of rock ’n’ roll in Los Angeles. When we started doing shows, it seemed like every rock ’n’ roll venue had closed its doors, and the ones who were open still didn’t want anything to do with us.

Everything was so “clique-ish,” and people seemed to be more interested in being “seen” or playing “dress-up” than actually caring about the music. In my opinion (and I always get in trouble for this), I think the majority of the bands that exploded in the mid-’90s garage scene weren’t very good at all.

I just knew that there were other people out there like us, and we decided to do some shows and see who came … we were right!

What do you think about college students?

I love college students. I was one not too long ago … They are the majority of the people who attend the shows.

The next REAL BOSS HOSS night is March 8 at Mr. T's. For more information, visit www.myspace.com/realbosshoss.