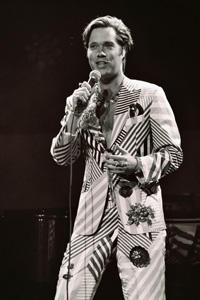 He began the “Ta” to his “Da” (the tour-concluding show at New York’s Radio City Music Hall that would occur two days later) in a fabulously gawdy suit, coated in striped patches and haphazardly-placed brooches. His band followed suit, and altogether complemented a giant American flag backdrop – black and white with brooch “stars” that represented all that is respectively wrong and right with America.

Save for intermission but including encores, Rufus Wainwright performed for two-and-a-half hours, using that necessary break for a costume change into lederhosen. Musical efforts, meanwhile, began with the lush, like the frustrated “Going to a Town,” and concluded with an encore that saw a white-robed solo performance of “Poses” lead into the diva himself breaking into lipstick ’n’ heels Judy gear, lip-synching to “Get Happy” while his backing band literally tumbled over one another in choreographed fun.

But Wainwright’s campy humor and style are matched by a flawless voice. At a time when Britney and Amy are plagued by media and addiction, Wainwright is, quite frankly, the most reliable diva we’ve got.