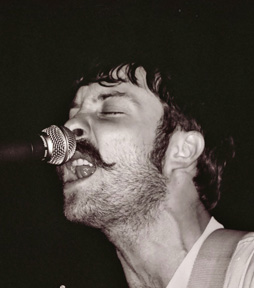 It wasn’t until Black Lips started up that the crowd actually revealed itself to be one of the most vicious and energetic that any recent Black Lips show has seen in Los Angeles.

Seconds in, we were swaying and stomping every which way, getting plenty covered by beers sloshing from multiple hands at once. It wasn’t much a show for friendly indie kids, helping each other up and apologizing for space constraints; no, we shoved, we elbowed, we watched loads of kids steal a moment on stage before fighting off security, often for a hug with Cole Alexander.

The vibe of the night was much more Halloween than Valentine’s Day, save for a neon heart resting inside Joe Bradley’s bass drum – lighting remained dark and dim, and even the Lips’ recent, milder numbers were kept rough.

The band itself was milder than usual, though, particularly compared to its fans, offering up no broken bottles, none of those infamous antics or bodily displays which, as of late, have been discussed in print more than they have been seen firsthand.