Omar Rodriguez-Lopez: Calibration (Is Pushing Luck and Key Too Far) 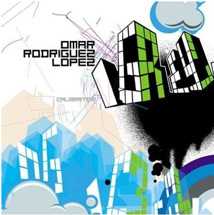 Mars Volta guitarist Omar Rodriguez-Lopez starts off Calibration with a three-minute nonsensical smattering of drum-banging and the type of guitar shredding that elementary school kids invented while exploring electronic instruments.

On his new solo album, the drums and their incessant racket made my body hurt. The guitars and their lack of melody made my brain have an anxiety attack.

“En Monte Tai” sounds like a Jewish prayer, poorly sung in Spanish, and the remainder of the album teeters between the soundtrack for a cheesy horror film and an over-zealous performance art routine on open mic night.

Rodriguez-Lopez is a talented musician, but his most recent solo effort finds him too tired for cohesiveness, opting to create yet another thrashing and convulsive testament to his abilities.

We get it, Omar, you’re good. Now make it sound nice.

Calibration (Is Pushing Luck and Key Too Far) is currently available.