L.A. Derby Dolls: Finding a Community of Love Within a Violent Sport 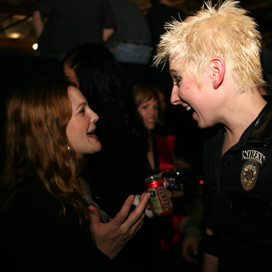 It’s Feb. 16, 2008. The Doll Factory on Downtown’s Temple Street is packed, from the V.I.P. bleachers to general admission standing room only. Enthusiastic fans line the circular slanted skating rink on which the L.A. Derby Dolls will soon jam.

Come to find out Barrymore’s directorial debut has something to do with this riotous scene. She’s signed on to direct Whip It, a $10 million film that’s set to go into production this summer in Texas, and will star Juno’s Ellen Page.

Both the screenplay for Whip It, and the book it’s based on, were written by Derby Doll Maggie Mayham, a.k.a. Shauna Cross.

It’s safe to assume something is officially hot when Ellen Page, Drew Barrymore and scores of L.A. hipsters have caught on.

On a more serious note, the first thing folks should know about the L.A. Derby Dolls is that their play is not staged or fake. Though there’s zero tolerance for fighting, the hits, blocks and falls endured while jamming are real.

“It’s part of the sport,” relays Iron Maiven, a.k.a. Rachel Piplica, 25, captain of the Tough Cookies. “You go into this knowing there’s a chance you could severely injure yourself.

“But you learn by taking the hits,” she continues, “by falling and getting injured. You get up and keep going, and that’s how you get better.”

Maiven found the L.A. Derby Dolls four years ago. She had just moved to Los Angeles and was attending fashion school, where not a kindred soul was to be found.

“I had nothing in common with them,” she admits.

Then she ran into a friend who was skating for the Derby Dolls and decided to roll with her one night to practice. She couldn’t skate at the time but she had to meet someone she vibed with or she was going to call her new life in L.A. quits.

“I went to the first practice, didn’t know how to skate, put my wrist guards on backwards, hurt myself pretty bad, had so much fun and instantly fell in love with everyone doing this that I decided I was going to make it happen no matter what,” Maiven recalls.

Another aspect about the Derby Dolls that’s easily noticeable is this camaraderie among the women. It seems that in addition to being sports addicts, each one has found a place where they feel at home.

“There’s a sisterhood in the league and bonding,” Maiven says. “We all practice together no matter what team we’re on. We’ve instilled that in our league, no separation among teams. We skate, practice and train together, which squashes any kind of beef. You might drop somebody and then get a beer and laugh it off.”

Yet another facet of Derby Dolldom is injury. The women understand that going down is part of the deal, and though most won’t admit to suffering much, bodily harm seems to be an everyday part of life.

It’s Monday, Feb. 25 and the Derby Dolls are practicing at the Doll Factory. Iron Maiven is sitting out with a pulled butt muscle. It’s nothing compared to her worst injury: a knocked-out front tooth.

“My mouth went into a two by four, my lip split in half, I fell off the track on the high end, which is six feet, emergency room, root canal, fake tooth, seven stitches … You give it time, it’ll heal and then you get back in there.”

Crystal Deth, a.k.a Crystal Early of the Fight Crew, 28, has been skating for four years as well. She confesses to never suffering a bad injury but reveals that she’s got water on her knee that has to be drained and isn’t supposed to be skating.

One last fact worth mentioning about the L.A. Derby Dolls is that every position is voluntary, from the coaches to the captains to the referees and even the Publicity Director, Judy Gloom, a.k.a Meghan Gaynor, who’s also been skating for four years. Each woman and man (the refs) has a full-time job.

Piplica is a production manager for Lucky 13 apparel. Early is a student at UCLA and assistant to a Federal Judge. Gaynor is a librarian.

What pulls these girls together is the thrill of the sport, the adrenaline rush of game day.

“You never know what you’re going to expect on the track,” Maiven points out. “Who’s gonna throw a hit, come out on top, who’s gonna get hurt that night, how you’re gonna leave feeling, the unknown. It’s always fun and exciting. You gotta do it again. If somebody beat you, you want to come back and beat them. I never stop thinking about it. It keeps me up at night.”

The next match, Sirens vs. Fight Crew will be March 15 at the Doll Factory (1910 W. Temple St., Los Angeles). For more information, visit www.derbydolls.com.