'Every Valley Is Not A Lake': Now-March 31 @ Found Gallery 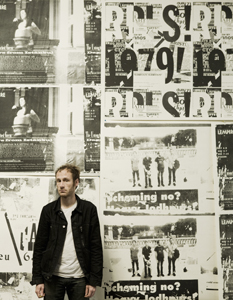 With the über-cool attitude only an L.A. band can truly master matched by the musicianship to actually back it up, Cold War Kids burst onto the indie rock scene from obscurity over a year ago as the proverbial full package. As such, it should come as no surprise that the band’s members are jacks of all creative trades, as showcased in bassist Matt Maust’s latest gallery showing.

Displaying some of his silkscreened prints, Maust is joined by band mate Nate Willett, showing some of his drawings, and photographer friend Matt Wignall, showing his own behind-the-scenes photos exploring the band members’ lives on and off stage.

“It’s stuff I’ve done on the road, some of the pictures are of us and our entourage of people and some of it is places and cityscapes,” says Maust of his and his fellow exhibitors’ work.

For his pieces, he says, “I tend to make things look like playbill posters and try to give the illusion of stuff that looks plain to the eye but doesn’t really make a lot of sense. A lot of my inspiration comes from the literary side of our band, I get inspired from Nate’s lyrics and try to interpret them in a more visual way.”