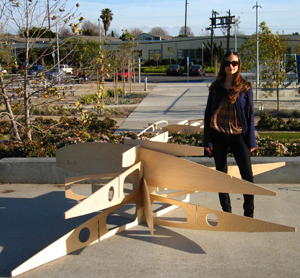 If you stroll past Santa Monica’s Airport Park, you’ll notice two giant wooden airplanes ready to take flight. Valerie Tymoczko is the 30-year-old local artist behind Propositions to Fly, the first of three art installations selected by the Cultural Affairs Division in 2007. The sculptures, which were inspired by vintage model airplane parts, are made with plywood reaching six to seven feet.

“I’m proposing the idea that these sculptures have the possibility of flying,” she explains. “I’m interested in imagining and believing in the object’s ability to do something unexpected.”

Tymoczko, who created one of the installations for her 2004 thesis show at Otis College of Art & Design, was inspired by sailboats, remote control airplanes and kites. It was a famed Dutch artist from Los Angeles who inspired her first solo public art project. “Bas Jan Ader’s ideas of hope and failure were very important in my piece,” says Tymoczko.

A fellow graduate of Otis, Ader’s most famous work, In Search of the Miraculous, a trip across the Atlantic in a sailboat, was his last. Ader’s body, lost at sea during his 1975 voyage, was never found.

“There’s a very romantic notion about setting sail and waving goodbye. His belief of making it was so powerful and real to him, but the ultimate failure was that he didn’t,” she relays.

Tymoczko teaches art and creative writing at New Heights Preparatory School and enjoys painting, piano, saxophone and her one-woman band, the Shrubs. In addition, she’s working on a collage containing classic National Geographic photo scans. While we may not be able to fly, Tymoczko still believes that through art, we can reach new heights.