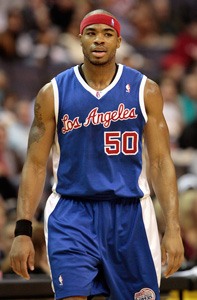 Most days it’s hard for Los Angeles Clippers fans to smile. Besides being the little brother to the 15-time champion Lakers whose building they have to share, the Clippers play in a stacked Western Conference where making the playoffs in this day and age means winning 50 games. The Clippers, coincidentally, have never won 50 games.

Two years ago, when the Clippers ended their season one game short of the Western Conference Finals, optimism spread through the ranks of Clipper Nation as they saw a bright future in the talent of their rising young stars. Now, optimism has become a four-letter word.

All-Star and MVP candidate Elton Brand has been sidelined all season with a freak achilles injury that was suffered during an off-season practice, guard Shaun Livingston has been out the better part of his career with knee injuries and team leader Sam Cassell has asked for and will likely be granted a buyout so that he can leave the team to seek greener pastures. Worse than any of that might be the infighting between coach Mike Dunleavy and owner Donald Sterling, whose unwillingness to be patient during this time has resulted in coach Dunleavy’s threatening to leave at season’s end.

But don’t give up hope quite yet, Clippers fans. While no one would say that the injuries to Brand and Livingston are a good omen, the space created on the floor by their absence has allowed for a very good year from Corey Maggette and from rookie standout Al Thornton.

It has also allowed for a break out year from forward Chris Kaman, whose 13.3 rebounds a game is third in the league, up almost double from last year. While that number along with his increased scoring (16.2 ppg) might level off with the return of Brand, the West has always been a conference of size.

Top teams like the Mavericks, Suns, Spurs and Lakers are all trotting out multiple centers in their starting line-up, and rebounds are coming at a premium in competitive games. The ability to put two talented big men on the floor next year will be the Clippers greatest strength and their best chance at competing in the difficult West.

Barring any miracle, or a 27-game win streak (which might itself constitute a miracle), the Clippers chance at a playoff run this season is essentially over. Still, even this is a turn for the better.

The Clippers are currently looking at a top seven overall pick in what is shaping up to be one of the strongest draft classes for guards in recent years. With Indiana’s Eric Gordon, Memphis’ Derrick Rose and Arizona’s Jerryd Bayless all likely to come out early, the Clippers should have their pick at a top guard prospect. If Cassell’s early exit moves them down even further, they might have a shot at freshman phenom Michael Beasley, whose size, rebounding and perimeter play would be the perfect complement to Kaman and Brand, giving the Clippers the ability to sign and trade Maggette for an athletic small forward at a cheaper price.

The Clippers should be roughly $25 million under the luxury cap when the new numbers come out this summer, and outside of Maggette, they have all their key players locked up for a couple of years. If they can use that money to sign Maggette or another talented player, resign their important bench guys, pick up one fresh new talented face at forward and use the rest on an strong rookie draft class, then they have their first legitimate chance at competing in the more difficult NBA West. Heck, they might even win 50 games.