Flogging Molly: With the Soul of An Irishman 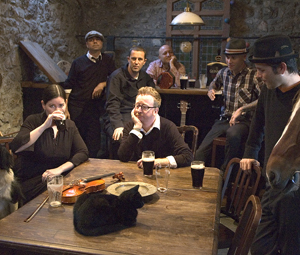 “I remember when I was a kid, there was always music in the house,” he says in the 2006 documentary film Whiskey on a Sunday.

He continues, “My mom and dad would go out to the pub, and they’d bring a load of people back. They’d all sit around in the front room – the only room – and sing. It was so much fun because they allowed me to stay up and sing.”

This was the beginning.

“I was in Ireland in the late ’60s, ’70s when Ireland was being ripped apart by war,” he tells the camera.

He recalls how gray their world was, both literally and figuratively, until one day his mom called him into the house.

“Look at this,” she said, pointing to the TV set.

She wanted her son to see David Bowie performing “Starman” on the British music chart TV show “Top of the Pops.”

As a boy stuck in Beggar’s Bush, King found hope and inspiration from the saturate world of music. Now he’s on the other end, giving hope and inspiration to others through Flogging Molly’s soulful, traditional Irish-inspired music, infused with its own punk twist. It's unbelievably-hard-not-to-dance-to music.

The band has been together for over a decade now and is comprised of seven amazing musicians of different ages and backgrounds who didn’t know each other prior to entering the band.

“I think it’s the music and all our differences that bond us,” explains electric guitarist Dennis Casey about what he attributes the band’s longevity to. “The chemistry when we’re all put together is stronger than each individual.”

I ask him if there was a dominant theme to their latest album, Float.

“You can interpret Float in many ways,” Casey says, “but I think it’s a testament to trying to keep your head above water … being aware of the things that keep you afloat and embracing them. It’s also a testament to the band and how long we’ve been together. Through all the turmoil and the piss and vinegar and hangovers … all the denials, trials and tribulations … we’re still a band. Still doing it.”

And doing it well. Throughout the world Flogging Molly has acquired a cult following that encompasses fans as young as toddlers and as old as great-grandparents.

“We all believe in each other, and we believe in our music,” King says about the band, more proud of his accomplishments with Flogging Molly than any other music venture in his life. “I’ve never felt like I ever wanted to be remembered for anything, but I really want to be remembered for this band. It means a hell of a lot to me. I’m very proud of it. It just was … destiny.”