Firebrands: First the Flash, Then the Pulse 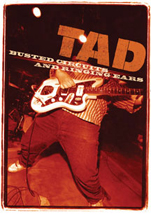 A lot has been made of the fact that Firebrands are based in Singapore. The five-piece has three Singaporean members, as well as one Russian and one American.

But if the band was rocking out on stage right in front of you and announced that it was from Hollywood, you’d believe them. Firebrands lives up to its name by playing scorching hard rock with a fervor that hasn’t been heard since Guns N’ Roses ruled the scene.

Lead singer eXe has a forceful, leathery delivery reminiscent of Ian Astbury (the Cult), and the band borrows arrangements from the cream of classic rockers. “Scarecrow and the Fire” gives a nod to Metallica, “Mort Pour Rien” sounds like the Who getting beat up by Rob Zombie and “Sunfire Ignite” is something that Zakk Wylde could bang out. “Soldier Song” takes liberally from Golden Earring’s “Radar Love;” so much so that it must be meant as homage.

First the Flash, Then the Pulse is currently available.