U-N-I: Leaders of the New West 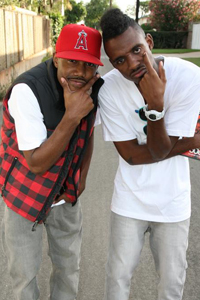 2008 has been good to U-N-I. The duo, comprised of Inglewood native Thurzday and Seattle bred Y-O, was featured on MySpace and in Slam magazine, and one of their songs was played at a Miami Heat game in Miami. Next stop: Santa Monica’s Temple Bar.

Y-O: We’re three songs away from completing A Love Supreme. The title was borrowed from John Coltrane, and the significance explains our passion for our music.

How does it feel to come off your debut, Fried Chicken & Watermelon, with such acclaim?

Y-O: It feels great that it has received such great acclaim. That shows that it’s acceptable to be true to yourself.

“K.R.E.A.M [Kicks Rule Everything Around Me]” got a lot of love from sneaker head sites, but do you guys feel typecast?

Y-O: We don’t feel typecast at all. We can rock any venue and receive love from any crowd. The shoe culture plays a major role in our lives, but we are far more than just materialistic artists.

Do you want a major deal, or is independent the future for U-N-I?

Thurz: The future will tell. The industry is evolving, and we’re tryna’ make sure we’re surfing on top of the new wave. U-N-I will perform March 14 at Temple Bar, Santa Monica. For more information, visit www.myspace.com/unimuzik.