Spring Movie Guide: A Slate of Films Blooming Into Your Local Theater 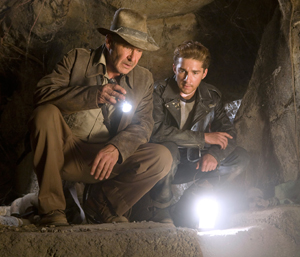 This is often the season of date movies, when the studios take a breather from likely award heavyweights and give us something to flirt with. But romance is not all that’s being served this spring. From investigations into war crimes and terrifying thrillers to examinations of the most far-out true-life stories ever and the last of 2007’s Sundance darlings, the next few months are sure to turn up the heat for all kinds of moviegoers.

A Sundance darling, this film, based on the novel by Stewart O’Nan, follows a couple (Kate Beckinsale and Sam Rockwell) trying to move on with their lives after separating. Their son, played by Michael Angarano, best known for playing a young William in Almost Famous, deals with his parents’ failed relationship as he tries to create a relationship of his own with Olivia Thirlby (the “best friend” in Juno).

Jim Carrey (formerly Dr. Seuss’ Grinch) voices the animated elephant Horton, who hears a cry for help from a microscopic community and becomes determined to help them despite his own community’s belief that he is crazy. With the voices of Steve Carell, Seth Rogen, Jonah Hill, Will Arnett, Amy Poehler, Dane Cook and Carol Burnett.

Director Michael Haneke already made this movie in 1998, but that was for European audiences. With marquee-name celebrities now willing to work with him after 2005’s Caché, here he is with a remake. Naomi Watts (who co-produced), Tim Roth and their son go to their vacation house, only to fall into the trap of two psychopathic youths (Michael Pitt and Devon Gearhart).

In a story about managing with the family you’ve got, 11-year-old Tara (Bridge to Terabithia’s AnnaSophia Robb) finds herself living with her young uncle (played by Nick Stahl of Terminator 3) after her unreliable mother (Charlize Theron) abandons her to hit the road for yet another boyfriend. Woody Harrelson and Dennis Hopper round out the impressive cast.

One thing movies like Zoolander, A Night at the Museum and Wedding Crashers have shown us is that Owen Wilson is very funny, no matter what the movie. In Drillbit Taylor, he plays a homeless, low-cost bodyguard hired by a trio of nerdy high school boys to protect them from the school bully. With a story by Seth Rogen and John Hughes – yes, the Home Alone-Breakfast Club-Ferris Bueller John Hughes – expect to laugh your socks off.

Bringing poker and improv comedy together – wasn’t there a TV show that did that? – The Grand stars a powerhouse cast that includes Woody Harrelson, Ray Liotta, Ray Romano, Cheryl Hines, Judy Greer, Hank Azaria, David Cross, Chris Parnell, Jason Alexander, Richard Kind, Michael McKean and, get this, acclaimed documentary filmmaker Werner Herzog as “the scary German”… all out to win the world’s most famous high-stakes tournament, the Grand Championship of Poker.

From Japanese horror director Masayuki Ochiai comes this tale (a remake of a Thai film) of a photographer (Joshua Jackson) and his new wife, who discover ghosts and a whole dead world in their photographs while on their honeymoon in Tokyo.

The true story of Ben Campbell (Jim Sturgess of Across the Universe), a brilliant M.I.T. student who joins a secret on-campus blackjack team, led by an unorthodox math professor (Kevin Spacey), to earn tuition money during weekend trips to Vegas. Laurence Fishburne, Kate Bosworth and Masi Oka (“Heroes”) round out the cast.

Audrey Tautou stars as Irene, a beautiful, scheming gold-digger who mistakes a bartender for a millionaire in the south of France.

No one went to see David Schwimmer’s directorial debut, 1998’s Since You’ve Been Gone, but he may have more luck with this London-set comedy, penned by Michael Ian Black and Simon Pegg (Shaun of the Dead, Hot Fuzz). Pegg plays an idiot who leaves his fiancée (Thandie Newton of Crash) on their wedding day only to discover that he loves her and wants her back a few years later. Only now she’s engaged to a wealthy, marathon-running Hank Azaria.

Award-winning writer/director Kimberly Peirce (Boys Don’t Cry) returns with this timely story of a decorated Iraq war hero (Ryan Phillippe) who comes home to small-town Texas after a tour of duty, only to be ordered back, against his will, for another round. As the community’s families try to cope, they realize that their husbands and sons have been damaged forever. Also starring Channing Tatum (Step Up), Joseph Gordon-Levitt and Timothy Olyphant.

George Clooney’s third time directing, this 1920s-set romantic comedy is a lot lighter than his previous Confessions of a Dangerous Mind and Good Night, and Good Luck. Clooney plays a brash football coach desperate to bring the sport to the country’s attention. John Krasinski (“The Office”) plays Clooney’s brand new star player, freshly back from Europe, where he single-handedly forced German soldiers to surrender. Renée Zellweger plays the ambitious reporter who, out to “out” the war-hero spin-story, inevitably becomes love interest to both men.

Jodie Foster plays a New York City novelist who pens the stories of world-adventurer Alex Rover but who never actually leaves the apartment herself. Abigail Breslin (Little Miss Sunshine) plays Nim, a girl whose life is a daily adventure as she lives on an isolated island with her scientist father. When her father goes missing, she asks her favorite adventure writer to leave New York and help her find him.

Winner of the Audience Award at last year’s Los Angeles Film Festival, this documentary follows Young@Heart, a Massachusetts-based senior-citizens chorus thathas traveled the world for 25 years with covers of rock ’n’ roll acts like the Ramones and Jimi Hendrix.

Dennis Quaid stars as Lawrence Wetherhold, a moody, self-absorbed, widowed Victorian Literature professor whose Republican, straight-A student daughter (Ellen Page) is supremely unhappy. His adopted brother (Thomas Haden Church), who could not be less like him, unexpectedly moves in and helps Lawrence move on and lighten up. Enter Sarah Jessica Parker.

The second film by acclaimed director Tom McCarthy (The Station Agent), this Sundance darling tells the story of 62-year-old Walter Vale (Richard Jenkins of “Six Feet Under”), a former professor who finds a young foreign couple, victims of a real estate scam, in his New York apartment. Letting them stay, he finds his spirits awoken by their youth, passion and music.

In the latest in Judd Apatow-produced dick flicks, Jason Segel (Knocked Up) plays a guy who’s just been dumped by sitcom star Sarah Marshall (Kristen Bell, “Veronica Mars”). In an effort to ease his pain, he travels to Hawaii, where Sarah is vacationing in the same hotel with her new boyfriend. Mila Kunis (“That ’70s Show”), Paul Rudd and Jonah Hill round out the cast.

THE LIFE BEFORE HER EYES (Magnolia)

Based on the novel by Laura Kasischke, acclaimed director Vadim Perelman (House of Sand and Fog) tells the story of Diana (Uma Thurman), who, now a suburban wife and mother, increasingly has flashbacks of who she was in high school (Evan Rachel Wood) as the 15th anniversary of a tragic school shooting that killed her best friend approaches.

Tina Fey plays a single businesswoman who wants a baby but can’t get pregnant. Amy Poehler plays a working-class girl who agrees to be the baby’s surrogate and, suddenly homeless, moves in with Fey. Fey’s precision collides with Poehler’s inertia as this odd couple prepares for the baby that’s coming. Hysterical. Sigourney Weaver and Greg Kinnear co-star.

Three years ago, Harold and Kumar became unlikely heroes for America’s hyphenated-American youth. They now return to both celebrate and offend us once again with an adventure that leads Kumar, a suspected terrorist, to Guantanamo.

A shy accountant (Ewan McGregor) gets a new boss – a cocky, charming lawyer (Hugh Jackman) – who turns him on to a mysterious sex club known as “The List.” He soon falls for one of the network’s women (Michelle Williams) and becomes the prime suspect in her murder case when she disappears.

Eccentric (to say the least) writer/director Harmony Korine (Kids) returns with this story of an American Michael Jackson impersonator (Y Tu Mamá También’s Diego Luna) who meets a Scottish Marilyn Monroe impersonator played by Samantha Morton (Minority Report) in Paris. She invites him to her communal home in Scotland, where other celebrity impersonators (played by the likes of Werner Herzog and David Blaine, no less) live, including her husband Charlie Chaplin and their daughter Shirley Temple.

MADE OF HONOR (Columbia)

In this male-skewed My Best Friend’s Wedding, Patrick Dempsey plays a playboy who is ignorantly in love with his best friend, played by Michelle Monaghan (Gone Baby Gone). She gets suddenly engaged; he, her maid of honor, tries to belatedly win her over.

The iconic 1960s Japanese animated series comes to the big screen with the help of the Wachowski brothers (The Matrix series), Emile Hirsch as Speed Racer, Matthew Fox as Rex, John Goodman and Susan Sarandon as the parents and Christina Ricci as Trixie.

In the latest from director Tom Vaughan (last year’s wonderful Starter for 10), Cameron Diaz and Ashton Kutcher play a couple of strangers who meet one night in Vegas, get plastered and … marry. They also win big at the casino, but it’s not clear to whom the money lawfully belongs. In an attempt to bide their time, undermine each other and win the money, they stay married and, whad’ya know, start to fall in love. Rob Corddry and Queen Latifah round out the cast.

INDIANA JONES AND THE KINGDOM OF THE CRYSTAL SKULL (Paramount)

Harrison Ford is back as Indiana Jones, this time in a race against the Soviets in 1957. The Russians may be coming – again! – but the good news is that Cate Blanchett stars as the villain, John Hurt plays Abner Ravenwood, Jones’ once-thought-dead mentor, and Shia LaBeouf is, that’s right, Jones Junior.

SEX AND THE CITY: THE MOVIE (New Line)

It’s really a toss-up as to which has been more eagerly awaited, the return of Indiana Jones or of Carrie Bradshaw & Co. All the girls are back for writer/director/producer Michael Patrick King’s first foray into feature film. What’s going to happen is anybody’s guess, but expect a surprise. And, no, it’s not that Mayor Michael Bloomberg is in the movie (he is).

ALSO IN THEATERS THIS SPRING: