The Other Boleyn Girl: (Columbia) 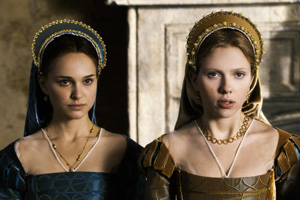 Phillipa Gregory’s novel, The Other Boleyn Girl, provides all of the soapy, gossipy fun of a chick-lit favorite, like a Bridget Jones’ Diary of the 1500s. The film version tries too hard for legitimacy (read: Oscar attention) aiming for serious credibility rather than letting itself luxuriate in the sudsiness of the genre.

Let down by director Justin Chadwick and writer Peter Morgan (so successful with The Queen), Scarlett Johansson, Natalie Portman and Eric Bana got laughs instead of gasps from the audience when they fell into the trap of playing scenes too straight.

Also at fault are the cinematographer and production designer (Kieran McGuigan and John Paul Kelly) for failing to capture the beauty and decadence of the setting and actors – why cast Scarlett and bleach out her eyebrows so she looks sickly?

Instead of watching the movie, why not read the book and treat yourself to the sequel, The Boleyn Inheritance, to find out what happens next in one of history’s best sagas.

The Other Boleyn Girl is currently in theaters.